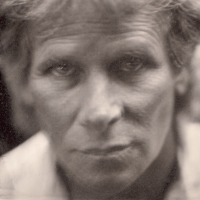 I was born in New Orleans, Louisiana in 1959. In 1962 my family moved to Tucson, Arizona where I was raised along with two younger brothers and continued to live through 2004.

I earned my undergraduate degree in Anthropology with a minor in Art from the University of Arizona in 1983. In 1987 I began graduate work in the Quaternary Studies Program at Northern Arizona University, but abandoned that in order to devote full-time to photography. I joined the staff of the Center for Creative Photography in 1989 where I was assistant staff photographer through 1998.

I usually work with large-format view cameras of various size and shape from 4×5 through 7×17, and print using the Platinum/Palladium process which had its heyday in the late 19th to early 20th centuries and has enjoyed a renaissance of sorts since the 1970s. Usually I print with original film negatives, but sometimes I bring it into the 21st century by using digital technology to produce the enlarged negatives from the original film. Most of my earlier work (pre-1991) is currently available only as digital prints.

In addition to the work on display in this website, I also offer art reproduction services for painters and other artists, as well as custom printing services for photographers.