Note: Since early in 2016, I have been making my digital negatives using the PiezoDN system from Jon Cone and Walker Blackwell at InkjetMall. I believe it is in a class by itself, however I realize that a dedicated solution such as PiezoDN which requires a special inkset and special software is not for everyone.

This method of making digital negatives is for those using Epson printers with the standard Epson color inkset. The only special software necessary is QuadToneRIP (Mac and Windows) and PrintTool (Mac only) which you probably already have. If not,  you can find them at www.quadtonerip.com.

You will also need a densitometer or spectrophotometer to read the results of the printer step-tablet, and a spreadsheet (Excel, Numbers, &c.) to evaluate the results and produce the Gray Curve.

The goal of all approaches to making digital negatives is to create a negative in which the density range (DR) matches the exposure scale (ES) of the printing process. Methods that rely on the standard printer driver are limited to using the Media Type selection to control the amount of ink (ink limits) applied to the film. A Photoshop curve is required to do the heavy lifting of pulling and pushing the tonal values to where they need to be in order to produce a print with a linear tonal scale. QuadToneRIP (QTR) allows for much finer control of how the inks are used. A good QTR profile, before the addition of a process specific correction curve (Gray Curve), will produce a negative that prints fairly close to linear. The Gray Curve needed to linearize the profile will be very gentle, especially when compared to the very steep toe and shoulder section and flat mid-ranges of the curves required in other approaches.

Please note that this Curve uses Photo Black. There has been some confusion about this since Reeder and Hinkel used to recommend the use of Matte Black. As of 2016, Reeder has changed his recommendation to Photo Black. Most of us who have been making inkjet digital negatives for a while (I began in the early oughts), are aware that Matte Black has several drawbacks:

Photo Black, on the other hand:

I still run into someone now and then who insists that MK is better. I’ll just say one more time that it is not – use PK.

The example I am using in this article is for a Palladium (Pd) print on a typical paper, Revere Platinum, with only enough restrainer (“Na2” Platinum in this case) to prevent fog in the highlights in the event that the ferric oxalate sensitizer has gone slightly ferrous. (Some people prefer to use more restrainer, others prefer none at all.) I also add 1 drop of Tween 20 per 1 ml of solution to aid in even absorption. Exposure is for 150 seconds (2½ minutes) under a bank of Hitachi F20T9/BL fluorescent Blacklight (BL) tubes. The print is developed in Potassium Oxalate (KO).

Note: This target is a positive. I do the inversion to negative in PrintTool.

More properly called an Ink Descriptor File, the QTR Curve is a set of instructions that determines how the printer applies ink to the substrate when printing with the QTR driver. In the Mac version, QTR works as an alternative to the Epson printer driver. It appears in the printer list as a separate item with a name such as Quad3880, and is accessed through the Print menu from any application such as Photoshop or Print Tool. In the PC version, QTR is a stand-alone program. The PC version also includes a Curve Creator tool, which the Mac version lacks. In the Mac version, QTR Curves are created as text files using TextEdit or another text editor app.

The procedure for designing a curve has 3 major stages. For each stage you will print a 21-step target negative utilizing the relevant curve for that stage. You will then print it in the darkroom using the process that you are designing the curve for. All process variables must be pre-determined and adhered to throughout, since any change will require starting over. (I recommend using an analog step-tablet such as the Stouffer TP-4×5 21-step for preliminary testing since it will teach you a lot about your process and how variables such as paper, developer, metal mix, &c. interact with each other.)

This is a screenshot of the text file of the finished curve we will make here: 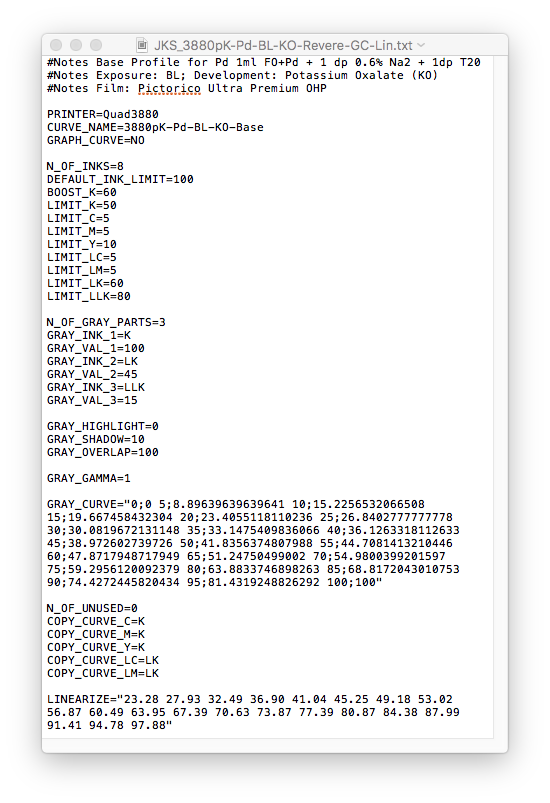 Please see the last section Printing The Negative for specific instructions on setting up PrintTool and QTR for printing negatives.

Stage 1 – The Base Curve

Feel free to use this as a starting point if you like. Other processes may need adjustments to the ink limits. I recommend leaving the all the color inks as they are and raising or lowering only the K, LK, and LLK limits as necessary. Note: The raw data is not as smooth as what I have shown here. I am using the QTR Data-Tool to smooth the measurements then plotting the L* values from that.

Once you are certain that your exposure time is correct (the minimum exposure required to achieve maximum black), and that you have a good base curve (all steps of your target are distinguishable even though they are not yet evenly spaced), it’s time to begin the process of adjusting ink densities in a way that results in a linear distribution of tones in the print. For the first part of that we are going to use QTR’s Gray Curve function. Basically what we are doing is seeing where there is too much ink and where there is too little, and giving QTR the instructions it needs to correct that situation.

Note: It is possible to eliminate the Gray Curve and just use Linearize, however, Linearize can’t be used iteratively.

I’ve used a variety of spreadsheet based methods of creating the correction curve, starting with a simple mirror image, and most recently with this method which uses some quite sophisticated math to convert density readings to LAB. The latter, developed by Richard Boutwell and available for free download from his website, is what I am using here. (Richard also has other interesting tools for making digital negatives, but you must buy them.)

A note about Density versus LAB: Density is a logarithmic scale and as such a curve made using Density readings without converting to LAB will be mathematically linear but not visually linear. Therefore the resulting print will appear dark. The LAB system was designed to compensate for this and to produce a visually linear print. I only learned about LAB about 2 years ago. At that point I finally understood why I had been having to manually and through much trial-and-error make a curve that bent towards the lighter side of the graph to get a result that looked right to my eyes.

Begin by entering the 21-step Density readings from the print of your base negative. The spreadsheet converts the Density Readings to LAB (specifically the L* component which stands for Luminosity or Lightness) and generates a set of 21 number pairs in QTR Gray Curve format that you will copy and paste into the Gray Curve field in your Ink Descriptor file. Note that the function that compiles the string treats the numbers as text which results in many more decimal places than necessary. Don’t worry about this.

Make a negative using this curve, print it, and measure the results same as in the previous stage.

If you are using a spreadsheet graph to track your progress, enter the results of this step to it to see how close you got.

Copy the “For Digital Negative” LINEARIZE= string and paste it at the end of the curve as shown below. Then go to File > Save As … and save the curve with a new name. I simply add -lin to the end of the previous iteration.

Print your 21-step target file one more time using this curve, measure the results, and add to the graph to verify that the linearization process has achieved the desired result.

Don’t try too hard to make it perfect. As long as it’s reasonably close to straight you are in good shape. There will be some degree of “wobble” in all hand-coated processes.

Prepare the image file in the same way you would if your goal was to produce a high-quality black and white digital print. I work with scanned black and white film in 16-bit grayscale mode. If your originals are color film or files, they can be prepared in any way you like but will need to be converted to grayscale for printing. I use Gray Gamma 2.2 for the document profile. Whatever profile you choose, be consistent.

It’s not a bad idea to proof your file on paper with QTR before printing your negative. When you are satisfied with the digital print, you are ready to make the negative.

Recent versions of Photoshop, CS6 and CC, lack the ability to print with No Color Management which was an option at least through CS3. This unfortunately introduces the possibility of unexpected interference with the operation of QTR from the operating system or from Photoshop. It is possible to print negatives using QTR from within Photoshop but not without using some form of color management which is exactly what we want to avoid. Print Tool (by Roy Harrington, the author of QTR) is a simple stand-alone printing utility that restores the ability to print with No Color Management. 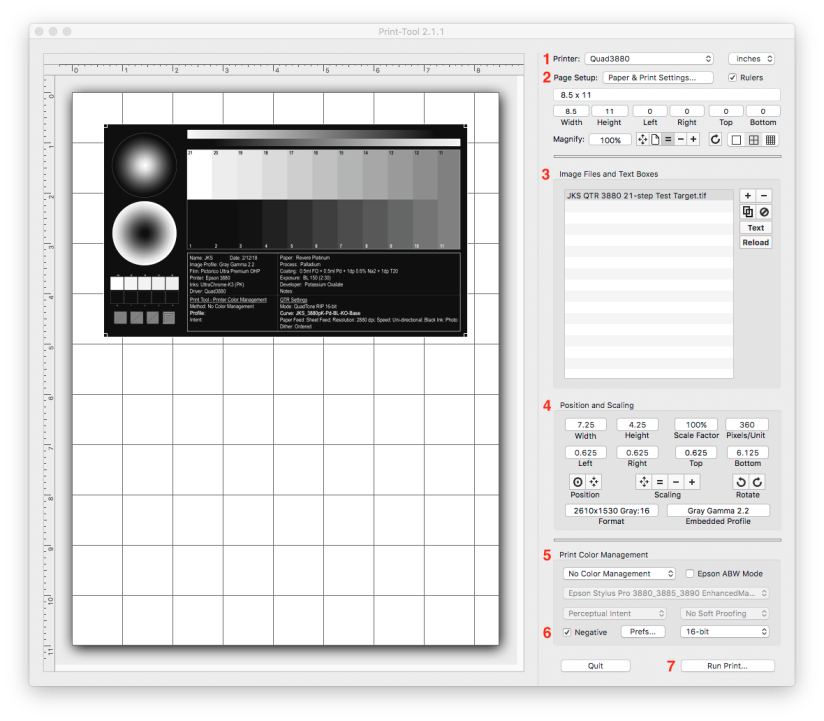 10 thoughts on “Digital Negatives with QuadToneRIP”