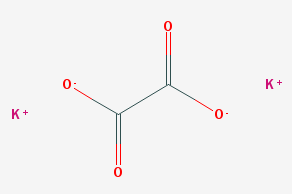 Potassium oxalate (which I abbreviate KO) is my preferred developer for platinum/palladium printing. Compared to the other commonly used developers for Pt/Pd printing, ammonium citrate and sodium citrate, KO produces a notably warmer image hue which is a quality I seek in most of my printing. Heating it – I usually warm it up to 120°F – increases the warmth even further. KO can be replenished indefinitely and never needs to be discarded unless it gets contaminated. It can also be used with small amounts of sodium dichromate added to control contrast at the development stage rather than in the coating mixture.

Potassium oxalate is usually mixed from powder to a 25-35% solution.

Note: William Willis, the inventor of the platinum process, is said to have used a 20% solution. This is not critical, however, with anything other than a saturated solution (as indicated by the presence of crystals in the container) will be difficult to maintain consistency, and the developer strength does have an effect on contrast and printing speed – a weaker developer solution (lower dilution) results in higher contrast and needs a longer exposure than a stronger solution. Fortunately, even if you don’t start with a saturated solution it will get there soon due to evaporation. If there are crystals at the bottom of your working storage bottle, you are in good shape.

How to Make Potassium Oxalate from Scratch

It is remarkably easy to make potassium oxalate developer from scratch using the component ingredients potassium carbonate and oxalic acid. Adding the acid to the base produces a vigorous exothermic reaction – lots of bubbling – so use a bucket at least 2 or 3 times larger than the volume you are mixing. I did not find it necessary to do the mixing outside.

The so-called “Cold Bath” developer is potassium oxalate modified by the addition of potassium phosphate monobasic. It is a hold-over from the late 19th – early 20th century days of factory-made platinum and palladium papers. The name is often misunderstood to mean that it produces a cold tone or hue. It actually refers to the fact that it is intended to be used at room temperature or colder. The hue, or image tone, produced is dependent on a variety of factors, most importantly the ratio of platinum to palladium and the particular paper being used.

To make Cold Bath developer from an already mixed saturated solution of potassium oxalate, it is first necessary to dilute the solution in order to be able to add something else to it. (Credit to Eric Neilsen for this idea.)

The Importance of pH

I’m swiping the title of this section from a brief typewritten sheet by Curt Richter that Todd Walker gave me many years ago along with a small bottle of the mysterious and legendary Fred Foster’s Ferric Oxalate that Curt had given him.

Curt’s note primarily addresses a problem that I’ve never encountered – pH that is too low. He says that acidity from the sensitizer can cause the pH to fall below 4 at which point   platinum becomes inactive. He suggests adding potassium carbonate to bring the pH back up to 5.5 – 6. I print primarily with palladium, so maybe there is a difference that can be attributed to the metals.

In my experience, it is much more likely that pH will go up, probably due to sizing or other material that leaches out of the paper. I check the pH periodically and if it gets above 6.5, I add a bit of oxalic to bring it down to the 5.5 – 6 range. In reality, it is rare that I have needed to do this, but it’s still a good idea to monitor the pH.

Even if you don’t begin with a saturated solution, the working solution will become saturated before long due to evaporation and the resultant increase in concentration. When you start to see greenish crystals form at room temperature in the storage jug, you know that it has reached the saturation point. This is a good thing because it means that the solution is stable and will perform in a predictable and reliable way. Even replenishing with fresh developer that is slightly below the saturation point (e.g. 25%) will not affect the saturation of the solution.

Concentration and pH can have an effect on printing speed and contrast, so if something is not working the way you expect, these are the first items to check.

Most of the better references, such as those I’ve already noted, will say that potassium oxalate can last forever. I have found this to be true, though twice since I began Pt/Pd printing in the early ’90s my KO has died very suddenly.

Replenishing KO is very simple. Keep a working jug, and a fresh jug. As developer volume is lost due to being absorbed into the paper and possibly some evaporation (especially if you heat the developer), after pouring it back into the jug simply top off  with fresh developer to always have a full working jug.

As more prints are processed, the developer will take on an amber color from the unexposed dissolved metal salts that wash out of the paper and remain in the developer. This is a good thing. It means the developer is “seasoned” or “ripe”. If you find that there is more than a small amount of black particles or other debris floating in the solution it is a good idea to filter it out. A coffee filter works well enough for this if you don’t have lab-grade filter paper.

Image color is affected by several factors including the paper, the ratio of platinum to palladium, the developer, and the temperature of the developer. On the spectrum from coolest to warmest, a mix high in platinum developed in ammonium citrate produces neutral tones on most papers, while pure palladium developed in hot potassium oxalate produces the warmest brown tones on most papers. It is interesting to note that papers with a warmer base tone do not necessarily have a warmer image tone, in fact I would argue that the opposite may be true in most cases.

I learned of this method from Dick Arentz who credits it to Phil Davis. I do have an article by Phil where he mentions using a 25% solution of ammonium or sodium dichromate, though he does not go into systematizing it the way Dick does.

Printers who have only worked with perfectly tailored digital negatives may not realize just how flexible the platinum/palladium process can be. There are several methods of manipulating the exposure scale (contrast) of the process that enable the full-scale printing of negatives. Most of them involve modifying the coating mixture with a restrainer. The traditional A:B ratio method involves adding a minute amount of potassium chlorate to part B of the ferric oxalate sensitizer, while part A is normal ferric oxalate. More part B in the mix increases contrast. The method that has become prevalent since the early ‘oos is known as the Na2 method from the use of sodium hexachloroplatinate (Na2PtCl6).

The dichromates (ammonium, potassium, and sodium) can also be useful for contrast control, but rather than as an additive to the coating they are added to the developer. This method only works with potassium oxalate. While I’ve read of all three of the above mentioned dichromates used in this manner, the only one I have used is sodium dichromate (Na2Cr2O7). This was my preferred method of contrast control from the mid-90s until I fully adopted the Na2 method around ten years later. I used a 50% solution of sodium dichromate added to 5 separate bottles of KO according to the following schedule.

Figure 1 below shows the Exposure Scale for each level of sodium dichromate contrast control. As you can see, they are very nearly evenly spaced. I didn’t actually mix bottles 6 and 7, since they would produce higher contrast than have ever needed.

Due to a recent and as of yet insufficiently explained change in the potassium oxalate sold by Bostick & Sullivan (B&S), which occurred sometime between January and October of 2016,  I am suddenly getting significantly different results on platinum/palladium prints than what I am used to. I have been developing my prints with KO from B&S for something like 25 years now. My practice has been to keep a 1 gallon bottle of working developer that I top-off with fresh developer as needed. This way the developer is always “seasoned”. I never discard used developer unless it somehow becomes contaminated which until recently had happened to me only once in 25 years. The last time I started fresh was in 2008 when I settled in to my current home/studio. My last 2 purchases of KO powder from B&S were in January and October of 2016. The KO from January was the same as it had always been – crystals the size of small peas, but the KO that I got in October was more like medium-coarse sea salt. When I noticed this and called before mixing it to find out if maybe a mistake had been made in my order, I was told that their supplier had simply decided to grind it finer than they previously had. So I began to use it to replenish my working bottle as usual. After about a month of a fairly heavy (for me) period of printing, I had gone through about 3/4 of a gallon of the new KO being added to the working bottle, when during a printing session I noticed that the color of the developer had changed from a deep but mostly clear amber to an opaque black. The next day when I examined those prints in normal light, I noticed that they were dull in contrast and neutral gray in tone, rather than the warm black that I expect from pure palladium prints developed in hot potassium oxalate. Then I noticed that there was about an eighth of an inch of black sludge at the bottom of the bottle rather than the normal greenish crystals. Filtering did not help, if fact the sludge stuck to the bottom of the bottle.

Figure 2 plots the variations in the results of a 21-step Stouffer step tablet printed on Hahnemuhle Platinum Rag developed in the “new” B&S potassium oxalate and freshly mixed “Home Brew” KO compared to an earlier test under the same conditions but using my old “seasoned” B&S KO before it went bad. The graphs are screenshots from the ancient (c.1991) BTZS Plotter software, which I still find very useful for process analysis.

Figures 3, 4, and 5 below are the individual analysed curves. minimum image density (IDmin) is defined as 0.04 over paper base, and maximum image density (IDmax) is 90% of maximum measured density which is standard for evaluation of density range and exposure scale. Figure 6 shows the Exposure Scales of the 3 tests relative to each other in descending order.